Children of all ages have a basic need to know they belong – within a community, a world, a universe. Western science reveals that it has taken 13.8 billion years to bring everything that’s alive today into existence. Thus everything is special and we all belong here! But the vastness of time challenges the educational community to develop creative materials to show students how everything fits together. The We Belong spiral timelines described here are examples of materials that can do this.

“… all things are part of the universe and are connected with each other to form one whole unity.  This idea helps the mind of the child to… (become) satisfied, having found the universal centre of himself with all things.”

Whether a curriculum goes by the name of Cosmic Education in elementary Montessori classrooms, or by Big History in public high schools throughout the country, our scientifically-based creation story is being taught in thousands of educational settings throughout the world. Among its many benefits, this story is an antidote to self-absorption, a hallmark of normal childhood-adolescent development as well as a defining characteristic of our own American culture. Many of our problems today– such as violence and environmental degradation– stem from individuals/cultures acting as if the universe revolves around us. When we experience belonging to a larger whole, our identity expands to include others— human as well as the more-than-human world.

Children’s imaginations can be sparked with materials that appeal to multiple senses. Fully 65% of us are visual learners (vs. the other 35% who learn primarily through text, audio, or kinesthesia). Spiral timelines or timespirals engage multiple senses and thus can be especially helpful to visual-kinesthetic learners. A myriad of time-related processes and events are shown and thus help orient people within the vastness of Deep Time. This provides a foundation for further study of astronomy, earth sciences, biology, and history. Because these spiral timelines combine text-color-form, and are constructed to encourage hands-on exploration, they can reach people from ages 5 to 105 whose learning preferences span the spectrum. 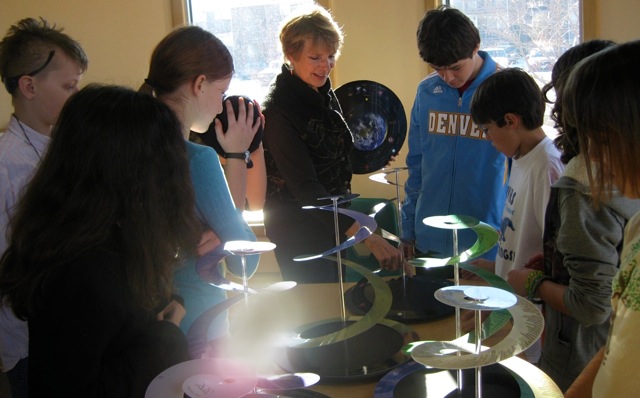 “I love to watch my students spinning the spirals. The ability to TOUCH time makes Big History personal and meaningful to them.”

Each set of spiral timelines contains 6 views of time.  The first four cover the longer-view time periods of:

• 13.8 billion years to Now: We Belong to the Universe – tracking 9 billion years of galaxy and star evolution including lifecycles of different sizes of stars, leading to the emergence of Earth some 4.5 Billion years ago, and using the visual of Earth as it appears today. 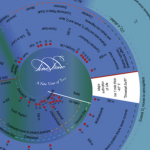 • 4.5 billion years to Now: We Belong to Earth—showing colors of the planet’s surface as if photos had been shot from space every 100 million years to the present, and presenting the major cosmic, geologic, atmospheric and biologic events and processes that have occurred.

• 570 million years to Now: We Belong with All Life— chronicles the story of plate tectonics, major geologic events and emerging life. It also identifies “common ancestors” where human lineage coincides with the lineage of other present-day life forms.

I am not an historian. In fact, the subject I knew I’d never major in was History, since it was the most tedious high school class I ever took, taught by a football coach who had us memorize dates of disassociated events concerning wars and empires. Fast-forward 20 years: I heard a presentation of Thomas Berry’s work—masterfully recounting the deep time story given to us by science, including how humans fit into this Big Picture. I was deeply moved and motivated by this new understanding. Many educated people need hard evidence to accept that we humans really do belong here! As my chosen profession was environmental policy planning, it was too easy to see humanity as The Problem: degrading Earth and taking no responsibility for our actions. The story of our belonging completely changed my perspective and challenged me to find a way to share it with others.

“Timespirals are elegant and committed to scientific and historical accuracy. I consider them one of the most important teaching tools for the 21st century classroom.”

This is why the We Belong timespirals came into existence. The present moment is deliberately placed in the center of the spiral. Thus we humans, together with all other extant species, occupy the center no matter which of the 6 scales of time is on display – starting 13.8 billion years ago or starting 360 years ago. The spiral timelines come in 2 versions: as 2-D, they portray humans as surrounded by everything that has come before. Curiously, such a visual reflects a perspective common among indigenous peoples that we are always surrounded by the ancestors: star ancestors, mineral and plant ancestors, animal and human ancestors. In their 3-D form, the timespirals portray extant species as “standing on the shoulders” of everything that has come before us. The 2-D version is ideal for teaching purposes since the spirals can easily be seen by a small audience and then passed around the room; the 3-D version is visually captivating and includes a turntable to assist the kinesthetic learner.

So what happens when we see each person as supported by all that has come before? Many people feel special — within the context of relatedness to everything and everyone. It’s the relatedness brought out by the knowledge—confirmed by science — of belonging and emergence. This understanding can help us in our own lives— consider, for example, the relationship between the mass extinctions of life and the traumas of our lives: both have the potential to seed new possibilities for the future.

The final two timespirals—We Belong with Generations Past and We Belong to Dreams of the Future—directly invite personal interaction with both the past and the future, and can serve to draw people into the larger deep time story. Since all the spiral timelines are durably constructed and laminated, they can be personalized with a permanent marker. For example, students are encouraged to write the names of their ancestors onto the spiral that begins in 1650. Doing so enables them to view their family tree against the backdrop of world events.

Similarly, the sixth spiral timeline invites people into the future by encouraging them to write down their visions– on behalf of 7 generations yet to come. Imaging possibilities for the future will likely trigger fears, as well. Such an exercise offers opportunities to voice these fears and initiate discussions of alternative possibilities. New perspectives open when the context is expanded. A 13.8 billion year context makes our lives seem bigger, more connected, more significant. Verbalizing fears as well as dreams, in a home or classroom setting, builds trust among the people present, and – when facilitated by a skilled educator – such an activity also seeds hope for the future.

Future articles will explore further use of spiral timelines to:

Karen Kudebeh is the founder of TimeTrace, Inc. and designer of the We Belong series of timespirals. Her goal is to inspire people with the understanding that each of us is a unique expression of the Universe, while belonging in relationship to everything else. See www.timetrace.com.